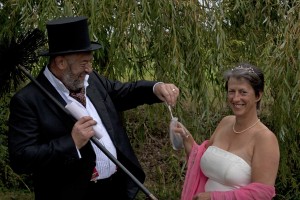 The tradition of Chimney Sweeps attending weddings for good luck started about 200 years ago when a fearless London chimney sweep stepped out into the path of the runaway horses & carriage of King George III (a yapping dog had startled the horses).

The King was so thankful that he took off his hat and bowed to the humble chimney sweep that had saved his life.

Later, when the King’s youngest daughter was to be married, King George sent for the chimney sweep because he believed that the presence of this chimney sweep – perhaps any chimney sweep – would bring good luck and happiness to his daughter in her marriage.

Thus the tradition was born, and it’s become customary to get the lucky chimney sweep a little more involved by asking him to kiss the bride and shake the hand of the groom.

The Royal Family have continued the tradition: when the Queen married Prince Philip a chimney sweep was ushered into Buckingham Palace and the Prince was seen to shake his hand (it’s not known whether he – the chimney sweep, not Prince Philip – got to kiss the Queen).

I can attend your wedding to wish you good luck and happiness. I would give you a gift of lucky coal in a presentation bag and a commemorative poem. 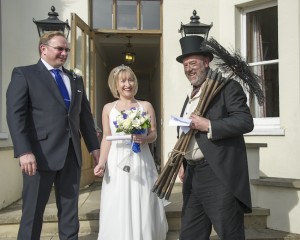 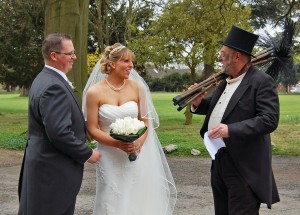